A stroke changes everything. In a matter of minutes sometimes, life of both the stroke survivor as well as his/her family changes. Roles change abruptly. A child becomes a mother and a mother the child.

Sometimes those who were the strongest in the family become heavily dependent it while a ‘carefree’ person becomes – without any preparation – a very important caregiver. So many aspects – finances, where and how to stay, treatment and nursing options – suddenly are thrust on largely unprepared persons. But love, compassion and just being there for one another can make a lot of difference ….

From the director Tin Pang :
The film is based on my experiences with my mother, particularly after we left hospital. The first few weeks at home are some of the toughest, and bring with it many conflicts and difficulties. I decided to shoot the film in one continuous take, as we follow two actors, Gabrielle Chan and Lawrence Leung, as the mother and son in a small apartment. It’s a very personal film, but also a project that strives to tell a truthful depiction of the Stroke survivor/carer dynamic, whilst raising Stroke survivor and carer awareness to audiences across the globe.
Mother, Child premiered at the prestigious Melbourne International Film Festival in 2016 and has since played at over ten major film festivals in Australia and overseas, including the Best Short Fiction award at the ATOM Awards in Australia and a Silver Remi award at World-Fest Houston in Texas.

Join other Stroke Survivors, Caregivers and equipment/service providers for help, encouragement , knowledge sharing and most importantly – hope – via: ** Whatsapp Group: https://strokesupport.in/contact/
** ALL other means to connect with us, including Social Media Groups and Channels on Telegram, LinkedIn, Facebook ( in many local Indian Langages) , Twitter, Instagram, Pinterest and YouTube ; as well as means of Volunteering, giving Feedback, sharing your inputs etc. may all be found at :
https://strokesupport.in/connect/
Please DO have a look and join in wherever convenient as well as share.
Thank you VERY MUCH ! 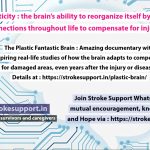 Please Join The Cause !

If the mission of Stroke Support India resonates with you and you can give 2-3 hours per week from your home, please see https://strokesupport.in/volunteer/ for how you can help.
Thank you and God Bless !

Disclaimer: The contents of this site ( as well as on its associated channels such as WhatsApp , LinkedIn, Facebook etc. ) are for informational and educational purposes only. Nothing found here or therein is intended to be a substitute for professional medical advice, diagnosis, or treatment. Always seek the advice of your doctor and other qualified healthcare professionals regarding a medical condition. Never disregard professional medical advice or delay in seeking it.