Stroke in Women- Women are MORE at Risk !

Stroke in Women has its specific causes and symptoms, besides the general ones, and some pertain to conditions prevailing in India.

The National Commission on Macroeconomics and Health in India in a 2005 study projects about 1.6 million cases of stroke in India by 2015 with death occurring in one-fourth of the cases. Although,gender-wise data are not available for stroke in India, women have a higher incidence of stroke across the world. In the United States, stroke is the fifth leading cause of death in men, whereas it is the third leading cause of death in women. More than half of the new strokes occur in women and one out of every five women with stroke die.
In India, not only are the women less likely to receive medical care, they are also at increased risk of having a stroke because of the following reasons:

Are the symptoms of stroke in women different?
In addition to the typical symptoms of stroke (facial droop, arm or leg weakness and difficulty in speech), women with stroke may experience the following symptoms
Having a stroke is one of the most devastating and ‘life changing’ event. Timely recognition of risk factors for stroke in women is very important so that appropriate steps can be taken to prevent its occurrence. The difference in symptoms of stroke in men and women should also be kept in mind. Finally, the term ‘FASTER’ should always be remembered in the event of a stroke
F – Face droop
A – Arm or leg weakness
S – Speech difficulty
T – Time from onset of symptoms
E – Early – Seek medical advice immediately
R – Restore – Restore blood supply to the brain 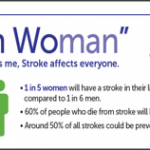